"IT IS DIFFICULT FOR ONE PERSON TO ACT A PLAY." - Chinese Proverb 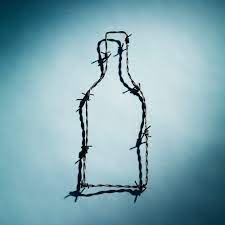 Reduced to next to nothing, addiction humbled me. A lesson to be learned in retrospect, I suppose.

In my addiction, I would learn that it would be okay. I would die with a drink in my hand. There could be no other way. Forty (40) would be my end, no doubt, were I even able to live that long. I knew alcohol was killing me, but it would be my hero's torch, or so it was that I one time thought.

Addiction does not care for analysis, self-analysis. That would be unnecessary. Denial could and would and did fill that gap. Addiction stripped away each layer of my character until there was no character left to strip away.

"It is difficult for one person to act a play."

It was difficult. I was but one person. And it was not a play. Neither acting nor reacting except the Chemical Need for More of the Killing-Substance.

When you are neither Person nor Play, it is absurd and sad and demoralizing, to say the least. I had become a Beast, a Human Animal, no more (or scarcely).

The wealth that is a person, me, had been reduced. Some people balked at the subtitle of my first book: The Destruction... of an Alcoholic Animal.

No longer a Person, Addiction reduced me to an Animal, a Rat in a Trap and mostly disregarded by the Lab Techs in the White Coats of my Imagination.

"I am not an Animal! I am a Human Being!" is a famous line from The Elephant Man.

I was an Animal. I was no longer (or barely, at best) a Human Being.

The whole simultaneous Illusion and the reality of addiction were on my back, crushing me.

No Safety Nets. No Exits. No Fellow-Actors in the One-Act Play my life most surely had become. No Set. No Props. No Audience.

But still and yet and soon, there was Magic to be had. I came to in a hospital bed one too many times in blackout non-remembrance as to how I got there.

A World of Others who'd been in the same Trap as I'd been in were the light that slowly, surely, entered my head, replacing 50,000 Drinks and Drugs that had consumed me, one by one, until a Recovery Life finally could be built.

"It is difficult for one person to act a play." Surely

Maximum Theatrics on a Summer Afternoon. Whether Actor or Audience, it has been done, For fun. For Amusement Only. But not in real life. Not in a life. Not in my life. The Addicted Life would Die and I would Live a Life in Recovery.

"It is difficult for one person to act a play."

Check out my NEW Non-Fiction, BECOMING UNBROKEN: Reflections on Addiction and Recovery
(Find it on Amazon, Book it here): https://lnkd.in/dkF767RT

Immerse yourself in my Descent into Addiction and eventual Recovery in my Autobiographical Fiction, ALL DRINKING ASIDE: The Destruction, Deconstruction & Reconstruction of an Alcoholic Animal

I hope you enjoy BOTH of my BOOKS on ADDICTION & RECOVERY! (Print & Kindle Versions of Both are Available!)