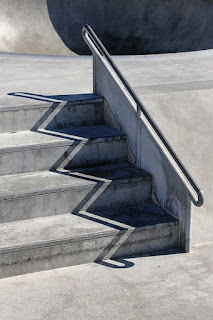 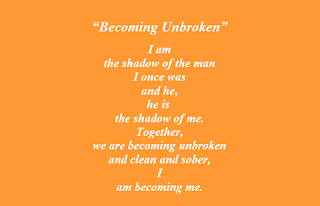 Immerse yourself in my Descent into Addiction and eventual Recovery in my Autobiographical Fiction, ALL DRINKING ASIDE: The Destruction, Deconstruction & Reconstruction of an Alcoholic Animal

Check out my NEW Non-Fiction, BECOMING UNBROKEN: Reflections on Addiction and Recovery
(Find it on Amazon, Book it here): https://lnkd.in/dkF767RT
Both Books are Available in Print and Kindle Editions.
at 12:35 AM No comments: 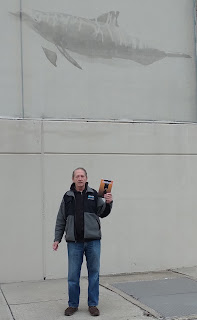 If I were to title this photograph, it would be "TWO SEA CREATURES," referring to the first Sea Creature pictured above me that lives in the ocean off to my left maybe two hundred yards and the second Sea Creature would be me crawling onto dry land after my 30-year descent into a Sea of Alcohol (seen here holding a copy of my first book).

So OBVIOUSLY, I know what a HANGOVER is, but what may not be so obvious is that after my second of three decades of Daily Binge Drinking, I rarely had a hangover.

I remained just drunk enough those last 10 years that a hangover rarely made an appearance. The Hair of the Dog kept my level of toxicity hovering somewhere between incapacitated and blackout drunk for that entire last decade.

"What about this DRUG-FREE HANGOVER? What's that about?"

It's about waking up Clean & Sober for the 17th year in a row without feeling the nagging aftereffects of the evening that preceded it.

When I drank, during my drinking decades, the hangovers, when I still had them, were about trying to piece together the events of the night before. Today, my drug-free hangovers are appreciating the lingering memories of time well-spent and fully enjoyed over these many clean and sober years.

A Splitting Headache or a Drug-Free Hangover? The Choice became more obvious to me as my Recovery has progressed. Today I know that Recovery is Possible, Doable, Irreplaceable. A Drug-Free Hangover comes Highly Recommended (pun intended).

Now, a New Year is upon us. I raise my glass of Sparkling Cider to toast the coming year. May we find Peace Together with each passing day, instead of failing to Piece Together the drunken blackouts of the endless string of days we've left behind.

Did I mention the Third Type of Hangover? There's the Drunk Hangover, the Drug-Free Hangover and then there's (unfortunately) My Belly's HANGING OVER My Belt!

Happy Hangover, One and All!

Between ALL DRINKING ASIDE & BECOMING UNBROKEN: My 2021 Year in Review

(fasken.com)
GEE WHIZ! What a Long Year 2021 has been! TWO GIANT LUMPS took up most of my time, the first being my 146 Commentaries on Quotes by the Famous, Infamous and Anonymous as they relate to my past Addictions & present Recovery (written between April and June) and the second being work on my second book nearly Daily since then.
HERE ARE A FEW SELECTED HIGHLIGHTS from 2021 in chronological order (except where noted, all are the Titles of Articles I posted on Social Media throughout the year).

01/09/21: "Slow the injection of truth. Insert the needle of truth into my vein, into my brain, slowly. First, hold the needle upright. Squeeze out any air. Leave only the clear, the liquid, the truth. Inject me slowly. I want to watch that crystal clarity enter my vein. The truth, too fast, could only scare me. Inject me slowly, or quickly watch me die." - [This little quote in the middle of a post I wrote about Confronting Truth turned out to be about the most controversial thing I wrote this whole year, mostly because of the very graphic picture of a hypodermic needle that accompanied it.] The rest of 2021 has been relatively smooth sailing since then:

03/10/21: The PRISM of EMPOWERMENT or The PRISON of ADDICTION

Also in March, I had the Honor & Privilege to be Interviewed on "Rapping with Dr. Jacalyn: Stories of Resilience" (a 45-minute Global Broadcast on YouTube) ​

07/05/21: I posted a personal favorite Recovery Verse on Linked in titled "Halfway to Nowhere (& Another Drink)"

If any of the above strike your fancy, they can be found in full indexed by date at www.alldrinkingaside.com.

While you wait for the publication of Becoming Unbroken in 2022, please consider ALL DRINKING ASIDE: The Destruction, Deconstruction & Reconstruction of an Alcoholic Animal