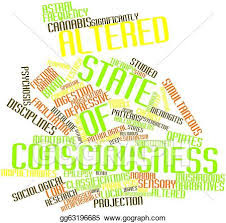 Circa 1970, a college Psychology course I took was titled "Altered States of Consciousness." Seeking a collage of mental states somewhere between Ecstasy and Oblivion, this course would be the roadmap for a Seeker such as I (or so I thought). That college course also included topics besides drugs, such as dreams, memories, sensations, mystical experiences, hypnosis, meditation... even sleep studies.
I had an emotional and intellectual desire to change my state of consciousness because I was in my late teens and early twenties and the United States was in a period of upheaval over the Vietnam war. But for me, it was far deeper than this surface dissatisfaction with the entire state of society at that time and my place in it. I had an inner unhappiness with my own state of consciousness, separate from the world at large. The easy fix, which is not exactly how I looked at it at the time, was for me to seek oblivion. I had no answers or solutions to anything. Nor could I even frame my discontent in the form of a question. What I sought, however, I found in multiple altered states. I expressed my uneasiness by seeking solace in drug experimentation. That seemed like such a fun and simple solution and was subculture-approved (and was really an unhealthy mix of procrastination and denial).
Timothy Leary had a phrase which encapsulated it: "Turn on, Tune in, Drop out." I gravitated toward drugs and was fairly swallowed up by the drug subculture of that time. Alcohol, marijuana and psychedelic drugs such as LSD and psilocybin were proclaimed to be my avenues of self-discovery, but would be better expressed as my means of escape. Narcotics and amphetamines were mostly used to prolong or shorten the effects of the other drugs I used. Every drug had a reason for self-prescription.
The first time I smoked marijuana and took speed and LSD and a whole alphabet soup of other concoctions was in 1969, so I stood at the ready. All in that one year I had experimented with so many drugs in quick succession that it became difficult sometimes to tell which drugs had which effects. Often, 2, 3 or more were scored and ingested, smoked or snorted in the same session. Side effects were attributed to consciousness expansion. "Those were the days" and "If you can remember the '60's, you weren't there" might well-express today the memories for those who moved beyond that era and graduated to adulthood. My youthful exuberance did not so evolve. My budding alcoholism blossomed into what became 30 drunken years. I found out so very slowly that the quick fix is almost always temporary. What was to have been temporary became permanent. Alcohol had me in a headlock and wouldn't let go. Being in a state of perpetual drunkenness became the new normal. All outcomes sloped downward in a 30-year long descent.
*****
Fast forward to the present.
Recovery is the oddest of mental states to me now. It is the altered state of consciousness that has survived beyond the innumerable catastrophes of all the others. To emerge from decades of chemically-induced insanity is remarkable. Alcohol, prescription and non-prescription drugs, street drugs and the whole culture of addiction (I swallowed it whole) cut me in half and then in half again and then in half again and again. The thousand anonymous scattered little me's that somehow remained were rebuilt in such a fashion that instead of consuming drugs, I am now consumed by Recovery.
*****
An inside job I could never have done alone, I am now in recovery. I am recovering. You are recovering. We are recovering. The consciousness I sought those many years ago (unknowingly to escape from), I have finally found in Recovery. A raised consciousness and a tally of brutal experiences has taught me that "Nothing matters more than that we remain sober because when remain sober everything matters more." In the end, all I wanted to do was stop drinking because it was killing me. I did not know that I would find this. What I have found is a lifestyle that fits me from the inside out.
Recovery is my Altered State of Consciousness.
Lost and Found.
*****
#Alcoholism #Addiction #Recovery
*****
May you also enjoy ALL DRINKING ASIDE: http://amzn.to/1bX6JyO
4,444+++Recovery Tweets: http://twitter.com/JimAnders4
99+ Recovery Posts: https://goo.gl/fmzt9b
at 7:30 PM