PTSD: Do Not Forget a Soldier's Heart.

Lost in Terror when My Bottom Found Me,
Then This: So Close to PTSD, I wrote:

A soldier's heart is what they called post-traumatic stress disorder (PTSD) during the U.S. Civil War (which ended in 1865, one hundred and fifty one years ago). They did not know what else to call it. It was at the core of what they felt. "He's suffering from soldier's heart," they said.
Time marches on (and did march on) and during WWI the same sick soldier would be called shell-shocked. The munitions changed and the positions changed, the diagnoses altered slightly from the soldier's heart to the shell casings of bombs dropped too near.
The concentric circles of war overlapped once again in WWII and combat stress reaction and a spray of other diagnoses erupted as the medicalization of symptoms evolved and the prescriptions changed.
Today we call it PTSD and for a second we may look upon that same soldier as if under a microscope whose magnification may bring us closer to the truth found possible through advanced scientific methodologies, yet somehow further from the man, the man an echo beneath a barrage of symptoms.

Do not forget a soldier's heart.

*****
(Please note:  The above post is not from my book. When I first heard about Soldier's Heart, I was immediately reminded of PTSD and how I felt when I first hit bottom in 1996 - lost in terror.)
*****
Jim Anders is the author of All Drinking Aside: The Destruction, Deconstruction & Reconstruction of an Alcoholic Animal , an Autobiographical Fiction, linked here: http://amzn.to/1bX6JyO 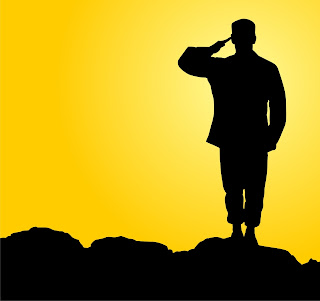