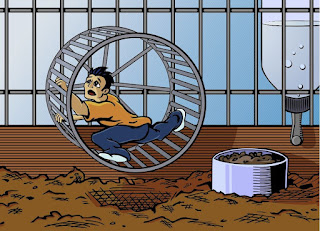 I danced my feet in and out of innumerable jobs before, during and after my decade as an advertising copywriter. While I tried to keep my advertising business afloat, innumerable restaurants and bars offered quick cash on a daily basis in the form of tips to fund my ever-increasing bouts with the bottle. I quit or got fired from several hot spots only to be rehired weeks and sometimes years later. Youthful exuberance lost ground to hangovers and eventually I became too drunk to work, calling out sick, three-day binges, hospitals, homelessness and yes, worse.

If you haven't figured it out yet, my resume began to look more and more like the Hamster Wheel that for the first decade of my 30 year Drinking Career I didn't even know I was on. Stopping drinking was out of the question. I knew that by my middle 20's. Unthinkable, undesirable and utterly impossible. Unknowingly, I lived like a prisoner in a concentration camp who scrawled artwork on the walls, never figuring out that it was despite alcohol and not because of it that I was able to create the stories, verses and advertisements that I really did produce.

Prisoner of Alcohol in a Lack-of-Concentration Camp.

That's not even funny.

I drank sixty or eighty hours a week (and more) the last decade of my Drinking Career, so now, having turned 70, I devote forty or so hours a week working on my Recovery. That's my full-time job now and that seems like a drop in the bucket. It's time well-spent.

30 years of daily drinking, 8 years of what is commonly called relapse (more aptly, eight years of learning how to live sober) and now 16 year of being an Alcoholic in Long-Term Recovery. All this preceded by 16 years from birth to high school add up to 70.

When I don't know quite what to do in any particular situation now, the answer now is never "Have a drink." It's always this: "What would an adult do?"

I'm still working on the answer to that one.

You may also enjoy my Autobiographical Fiction, ALL DRINKING ASIDE: The Destruction, Deconstruction & Reconstruction of an Alcoholic Animal

On Amazon.com. Book it here: http://amzn.to/1bX6JyO