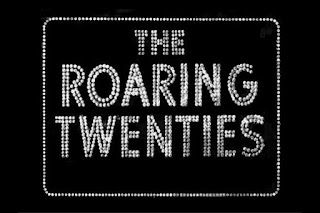 "My thought at the time was that we had to act like a movement until we became a movement." - "Recovery Rising" by William L. White, p. 331
***
"To refer to people who are addicted as alcohol, drug, or substance abusers misstates the nature of their condition and calls for their social rejection, sequestration, and punishment. There is no other medical condition to which the term 'abuse' is applied. If we truly believe that addiction is a serious health problem, then why do we continue to have departments and centers of substance abuse? The terms abuse and abuser should be now and forever abandoned in discussion of people with severe and persistent alcohol and other drug-related problems." - "Recovery Rising" by William L. White, p. 338
**********
The historic era following World War I and leading to the Great Depression is, of course, known as the Roaring Twenties. War-weary Americans saw the world through new eyes. Modern conveniences and leisure activities won out over hard work and self-denial. That, the Roaring Twenties of the 20th century, is being quickly eclipsed by the NEW "Roaring Twenties of Recovery" of the 21st century (2020 - 2029).
*****
On a personal level, 1970 marked the halfway point of my college years. Fifty years before it, the 1920's were just getting started and 50 years hence the bells of 2020 are about to peal. "Substance Use Disorder" was a term not yet in vogue in 1970. But the substances that I had used (in substantial numbers and varieties) were to be found midway through my brain and extend to the far fringes of my skull, thoroughly filtering through every cell of my body.
A large cache of psilocybin mushroom powder sat on the dining room table, right next to a finely graduated metric scale. Marijuana smoke and the smoke from cigarettes filled the air in equal measure. Psilocybin and other hallucinogenic drugs were dissolved in half-gallon jugs of cheap wine and sat out openly for any to imbibe. After all, we were quasi-sophisticated quasi-adults half out of our quasi-minds on pot and pills, pipes and other paraphernalia scattered about everywhere.
My thoughts (also variously scattered about) had no clear sense the I would one day (years later) be called a chronic alcohol and drug abuser by a staff of doctors and nurses whispering among themselves "Do you think he'll make it?" with me strapped on a gurney less than half-conscious, DT's (delirium tremens) moving in for possibly the last time as the sedatives (Librium, more than likely) began to grab hold.
They wondered if I would make it.
And so did I.
*****
Fifty years later and 2020 is nearly upon us. The Recovery Movement has surely already begun. Each of us will play a part in it by the actions we take and by the actions we have not yet taken. I most certainly hope that the decade about to start becomes known as the new "Roaring Twenties of Recovery."
HOPE is Our Most Renewable Natural Resource.
I stand at the ready.
One day at a time rushes towards us.
Take off your masks.
2020 is upon us.
Now... ROAR!

*****
"Nothing matters more than that we remain sober because when we remain sober everything matters more."
*****
#Alcoholism #Addiction #Recovery
*****
You may also enjoy ALL DRINKING ASIDE: The Destruction, Deconstruction & Reconstruction of an Alcoholic Animal
Find it on Amazon.com. Book it here: http://amzn.to/1bX6JyO
Recovery Tweets: https://twitter.com/JimAnders4
88+ Recovery Posts on LinkedIn
at 12:20 PM